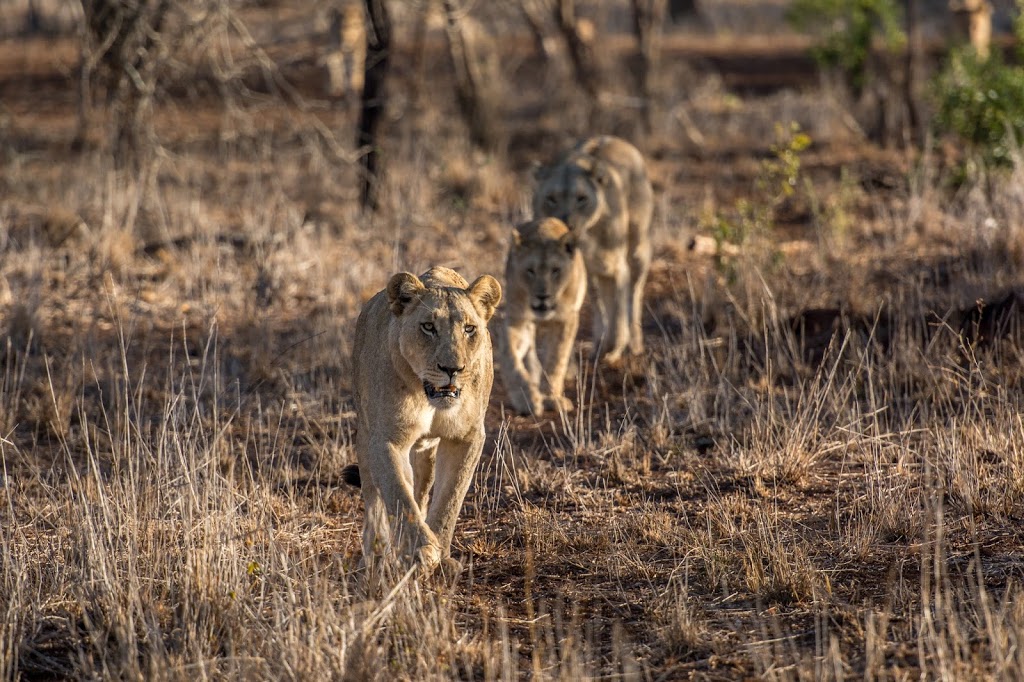 On the sundowner drive yesterday we caught up with our three “big boys”, the male lions.  I had four guests in the car, and as the first fellow ambled along the clicking of camera shutters increased markedly.  Lion #1 was followed by # 2 and a little later by #3, and they were quite content to settle in the grass.  Showing off for the cameras they rolled around, yawned and stretched and #3 even came closer to the vehicle, about 5 metres away, flopping down and acting pretty much like any cat.

While we were concentrating on #3, out of the corner of my eye I saw movement, and we all got to see #1 jump up and pounce on something.  #2 joined in what must have been an unsuccessful hunt, but #1 was quicker and we heard great squealing.  I managed to get the vehicle closer and we saw #1 had caught a small warthog and was settling down to eat, with the most graphic crunching and munching sounds.  #2 was keen to get a share, but was more distracted by the closeness of the game drive vehicle and the whirr of camera shutters.  #1 took this moment to move his kill a little further away, chewing and chomping even more furiously. #2 quickly followed to grab what he could.  Poor #3 was left right out of the action.

When dinner was done the boys settled their stomachs with more stretching and rolling, (and posing for cameras), and then it was time to for us to move on.

Male lions generally mark the lions’ territory, and they range over a few kilometers moving far away from the female hunts.  So the boys have to fend for themselves, and sort out their own supper snacks.  Nature is quite OK with this, one of the other spectators to this hunt was a male Nyala who kept an eye on much of the proceedings from a safe distance, until caution got the better of him and he slunk away into the bush.

As for Duze and guests, it was time to head to a different spot for our own sundowners and marvel at the big cats’ display (and bemoan the camera batteries which were now flat!).

A Rangers Perspective – The Leopard Sighting That Never Happened

Why is is that the best sightings always happen when you are alone and there are no witnesses?

When new guests are about to experience a game drive with us for the first time, we have a little chat to our guests while everyone is on the vehicle and we let them know what the procedures will be and any safety precautions while out on the drive. A ranger will almost always ask whether there are any special interests – meaning any birders, or people who are specifically interested in botany. This gives the ranger an idea on where exactly their interests lie and so boredom can often be avoided by stopping for things that no-one has any interest in. When posing this question to guests, the ranger runs the risk of getting inundated by lists of species that each one of the guests is hoping to see.
It will go something like this:
Suitably attired first-time-safari goer: “Well I’ve never seen elephant, lion, buffalo, pangolin, porcupine, aardvark, caracal, serval, polecat…Oh! And a Leopard jumping out of a tree onto an unsuspecting Impala!”

Well half of those things the rangers haven’t seen (and they are out doing drives every single day) and the other half are only seen on documentaries after 5 years of filming. Documentaries are great for education, but my goodness they set high standards for us!

The funny thing is that I have personally seen leopard out in the wild approximately 37.25 times (.25 is for the time I saw it’s tail disappearing into a bush) in the 5 years I have been living in a game reserve. Out of those sightings, I have been with other people – lets call them “witnesses” – about 22 times. Therefore the 15.25 times I have seen a Leopard without “witnesses” does not count.
That is the rule. There is however a loophole in the form of photographic evidence. BUT, the chances that your leopard sighting is long enough and fulfilling enough to get out your camera, remove the lense-cap and screw on the lenses are very very slim. These sightings are best appreciated without the help of a camera bacause they are fleeting. Your eyes will be glued and your breath stuck in your throat. These sightings will also happen while you are flying through the reserve, with somewhere to be and people to see. It will happen when you least expect it. Kind of like a UFO sighting but way cooler.

I know all this because I have done research. I have just now written a proposal to my boss on Leopard research requesting if I could please speed through the reserve for a month under the pretense of very special meetings to attend. It was turned down obviously but the reasons where apparently financial…

What this article comes down to, is that last week Tuesday I saw a Leopard. It crossed the road in front of me and it walked down along the road next to me. It was a fantastic sighting. The sun was setting behind me and the cat was lit up like a photoshopped postcard. Perfect.
Except, no-one believes me because there were no witnesses or photographic evidence.

So last month ended with a fantastic sighting of a Leopard with an Impala carcass. We were truly spoilt with that sighting and we really couldn’t have asked for anything more, but Mother Nature had another surprise in store for us…

With the traversing that we are doing across Zululand Rhino Reserve, all the rangers from the different lodges have decided that to make sure our guests experience everything the reserve has to offer we will now call in Big 4 sightings or any other sightings that guests may find interesting.
Isaac was out on the morning game drive, when the call came through over the radio that there was a Cheetah kill on our boundary. Off Isaac went and luckily enough he had the sighting to himself as the other game drive vehicles had already driven off. The two male cheetahs had taken down a Kudu ram and were lazily looking on from a shady overhang. They had obviously had their fill. Around the kill the vultures had already settled and were waiting for their opportunity to go ahead and devour what was left. A Marabou stork was also prowling around and snatching up any meat that might have been discarded during the Cheetahs feeding frenzy. What a great experience!

Dale, our Reserve Manager had an interesting find when he came across a massive African Rock python out in the reserve. We have been keeping an eye out for it as pythons of that size are really hard to come by these days what with all the threats they have against them. It seems to have made itself at home in a Warthog burrow right next to our main road and it has been spotted out sunning himself on quite a few occasions.

Back to birding, I had a very strange experience with a Tawny Eagle and a Steenbok. We had stopped off on a ridge to watch the birds flying down below us, when we a Tawny Eagle landed just a few metres away from a Steenbok who was out on an open piece of veld grazing. The Tawny then proceeded to run after the Steenbok and when it was close enough, it would jump up in the air and try and grab the Steenbok with its talons. Well the Steenbok did not seem at all phased about it as they were about the same size. The Steenbok would walk a few paces away and the Tawny would try his luck again running along and jumping up once the Steenbok was close enough. He was obviously convinced about his strategy as he went on to repeat the performance a few times before the Steenbok decided enough was enough and ran away!
Well that’s all until next month, signing off for now…

What a fantastic month for sightings it’s been! The White Rhino have been plentiful, but we are still hoping for those elusive Black Rhino to make themselves seen. Isaac had a sighting of a young black rhino who was previously quite a common sight with us here at Rhino River. It seems like he is still up to his old tricks of coming right up to the vehicle and having a sniff, before trundling back into the bush again. He sure does make for an exciting drive!

Speaking of excitement, we had a camp full of guests and both Isaac and I were out doing drives. Isaac noticed an Impala carcass near one of our waterholes on a morning drive and promised his guests that they would return on the afternoon drive to check if anything had fed off it. During our afternoon drive, Isaac and I agreed that we would meet at the same spot for sundowners. My guests were relaxing around the dam with drinks in their hands when Isaacs vehicle pulled up in a cloud of dust and excitement.” Leopard! Leopard!” they were all shouting. Of course I just had to get in on the action and so Isaac and I chatted about their sighting and he gave me directions to the Impala carcass where it had been spotted. My guests all dropped their half-drunk drinks in haste to jump back on the vehicle and head out.
As we pulled up in the area where the carcass was, I briefed my guests and asked if we could be especially quiet while we pulled up to the carcass. Leopards are notoriously secretive and shy and the best way to approach them is by stealth. Looking towards the right where Isaac told us the carcass was we glanced around looking for any sign of movement and there it was. A beautiful young Leopard sitting on the bank of the river, looking over at us with much curiosity. We had about 3 full minutes with him before he disappeared off into the thicket. Once he had wondered off, the guests and I exhaled in unison. We had all been holding our breath in fear that the slightest noise or cough would chase him off. Well, greed got the better of us and we decided to drive around the block and see if we could possibly be lucky enough to glimpse him again. As we rounded the corner, approaching the carcass, there he was again! Walking along the bank but quickly picking up his pace once he heard our vehicle approaching. We managed to watch him trotting off and realised our ”Leopard Luck” had been used up.

There is plenty more cat excitement for us here at Rhino River, but I’ll save that story for next month…