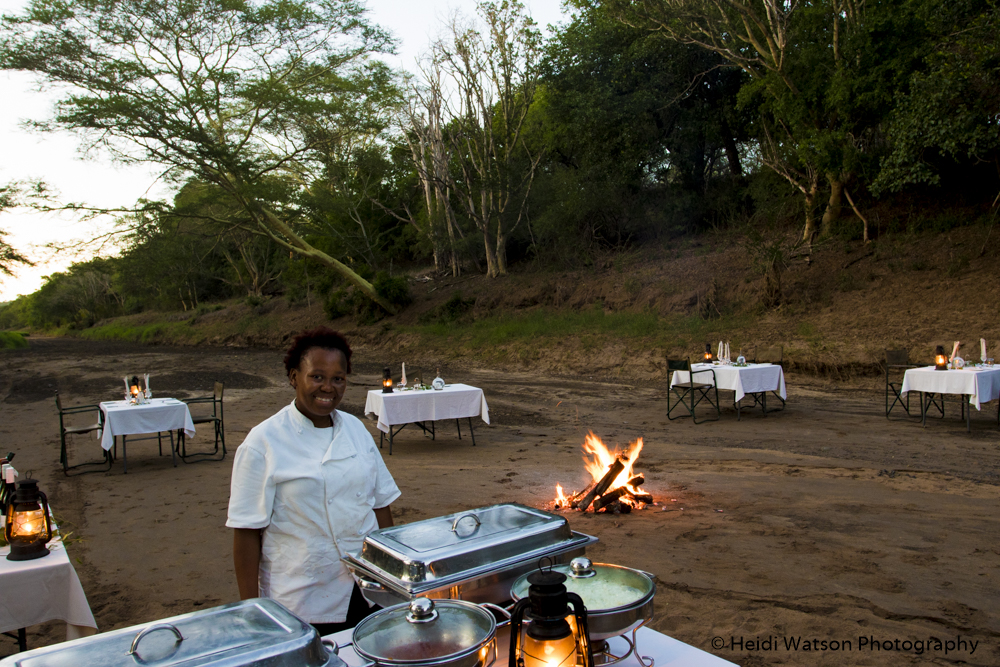 Thabi is our head cook at Rhino River Lodge. She is one of our newest staff members and has impressed us since day one with her hard work and creative flair in the kitchen. Here we get to know a little bit about the lady behind Rhino River Lodge’s delicious menu… 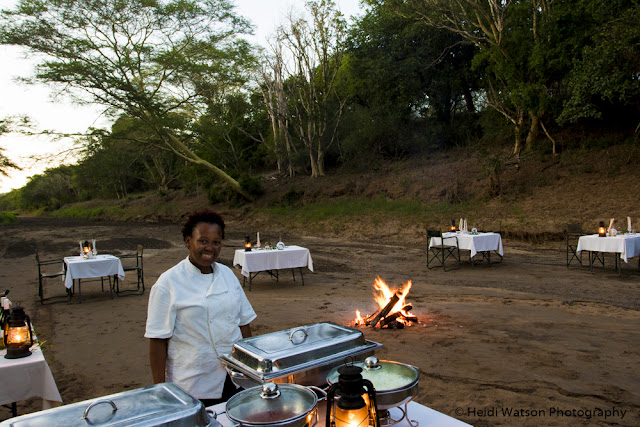 What drew you to your position at Rhino River Lodge?
What drew me to RRL was change and exposure to new things and a whole new environment. I got this and more, especially with the how warm and open my bosses are.
What aspect of your new position are you most excited about?
The fact that I am free to excersize my creativeness without limits.
What is your favorite part of being a cook?
Making people happy through my meals and seeing them smile and appreciating every meal. Which gives me great motivation.
How do you get inspirations for new recipes?
Mixing and combining the unusual with the usual.
What is your favorite recipe to prepare for guests on safari? Why?
Braai (Boerewors, Chops and Steak) with a putu pap and tomato & onion sauce. This is by far the winner with our tourists because it shows them how we South Africans love our meat!
Will you share an easy South African-inspired recipe with us?
Samp and Beans (which happens to be my favorite!)
Ingredients:
250g speckled beans
250g white samp
Tablespoon masala
Salt and Pepper
Handful fresh coriander (a.k.a. dhania/cilantro)
Tomato and onion mix tin
Directions:
Boil washed samp and beans together for 3-4 hours until soft.
In the last 30 minutes of cooking add masala, salt and pepper (to taste) and tomato and onion mix .
When the boiling is finished add a handful of coriander.
Serve with any curry of choice. 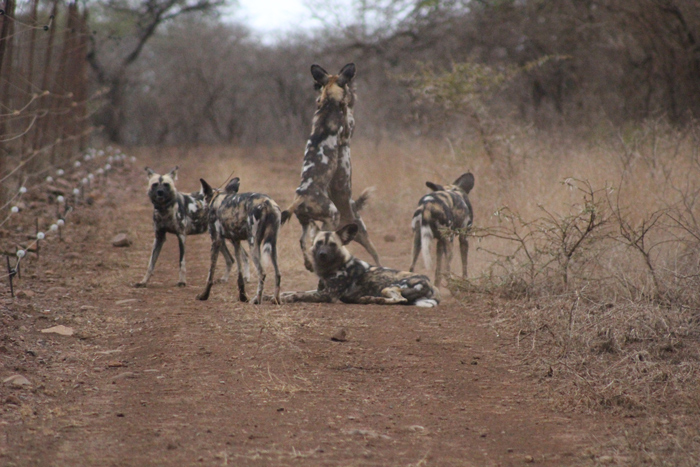 Feeling very Thelma and Louise, a friend and I had set off from Durban for a two-night stay at the stunning Rhino River Lodge in Zululand. The drive down was a piece of cake as we stopped to buy pineapples and Zulu beads along the way, admiring Zululand’s signature Nguni cows and coral trees. 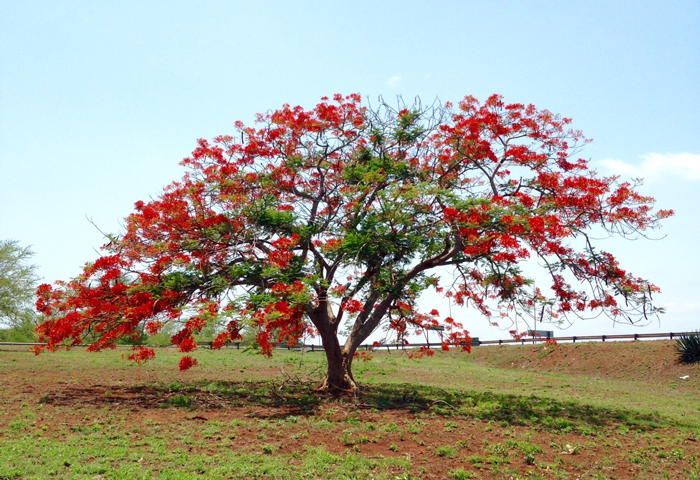 Kwa-Zulu Natal is arguably the best place to spot black rhino and we also saw loads of giraffes, cheetah and the rest of the Big 5. 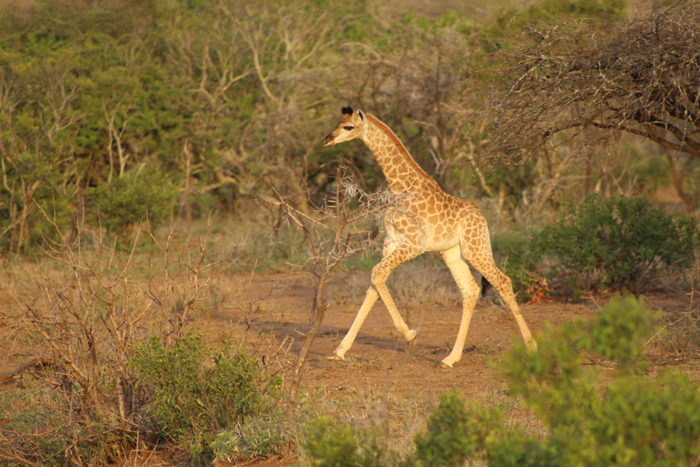 But one particular animal stole the show.

After a sundowner sipping on Painted Wolf Wines, we went to bed early in preparation for our 3:30am wake up call.

Not long after we set off, we found the dogs with one impala at 6.15am, an impala lamb at 7am and a juvenile nyala at 8.30am. The wild dogs had made three successful kills – all before our morning cup of coffee! 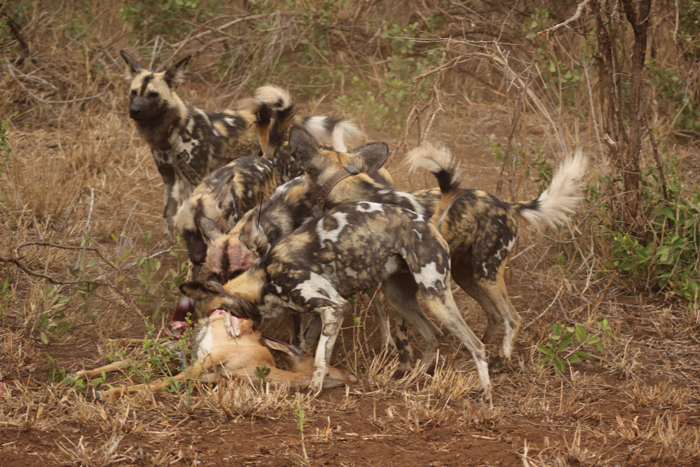 The Zululand Rhino Reserve pack is made up of six individuals: two males from neighbouring Zimanga and four females that were originally from Madikwe. These happy dogs are six of 500 wild dogs in the country that form part of a larger conservation plan with Wild Dogs Advisory Group (WAG).

We followed the dogs as they played, ran, lay down, licked each other and played some more. The dogs chased warthogs out of a hole, setting off a green wood hoopoe which in isiZulu is called iNhlekabafzi, meaning ‘cackling women’.

isiZulu has the most beautiful way of describing animals. As we followed the dogs down the fence-line we spotted iconic black and white Nguni cows on the other side – referred to as inasenezimbukane, meaning ‘flies in the buttermilk’.

When it comes to wild dogs, good fences make happy neighbours, and there is 200km of fence that surrounds Zululand Rhino Reserve. Wild dogs are boundary pushers and come in contact with fences often because they cover such extensive ranges so quickly.

After speaking to Sam and her team at Wildlife ACT, I quickly got to understand the group dynamics and even began to recognise individual dog’s characters and markings. Over time the volunteers have come to unofficially name the dogs, and if you spend so much time with these magnificent creatures, like Wildlife ACT does, it’s hard not get attached to them.

Male 1  is the first to flop to the floor and have a cat nap, hence his nickname ‘Floppy’. Floppy is the low ranking dog and the last to eat at meals based on the pecking order. However, despite his languid nature, Floppy is very curious and is the first to run off to investigate something interesting.

Male 2 is the alpha referred to as ‘Endo’ because he likes to stand on his two front paws and lift both of his back legs when he piddles. This makes him look like he is popping a wheelie – hence the biking reference.

Female 1-If ever there were an eighth dwarf, Bossy would be it. Bossy was the original alpha female when the dogs were released and she is most likely to initiate kills and plan the route that the dogs are taking. She had an incident with a snare but has fully recovered with the help of Wildlife ACT and reserve management. Snares are one of the biggest threats to dogs in Africa. Although not normally intended to catch painted wolves, the dog often fall victim to snares.

Female 2 is the pack’s wild child. Named after the ‘Notch’ in her ear, she is most likely to be reported missing as she wanders off alone following her nose.

Female 3-Indie is the alpha female and her name was mapped out for her by her coat that forms a map of the Indonesian Islands. She is incredibly brave.

Female 4-Eggs is named after the two fried-egg markings on her back and she offers some comic relief for the group. She is bullied a bit but generally just tends to keep her nose out of trouble and blends in.

The dogs eventually settled down in the shade to sleep off their full bellies and in the midday heat we headed back to camp. Having spent the entire morning in hot pursuit of the African wild dog, we arrived at Rhino River Lodge exhausted and dusty and were more than happy to tuck into a delicious brunch and to work on our tans by the pool.

For a lion, learning to hunt is one of the most important skills that it will ever acquire. In the early days hunting is a combination of instinct, observation, and practice for young lions. Wildlife photographer Heidi Watson was on a game drive at Rhino River Lodge when guests were privileged to witness a hunting lesson with a lioness and her two sub-adult cubs. She shared her photos and story with us.

Early one morning the Rhino River Lodge game drive happened upon one of the Zululand Rhino Reserve’s resident lionesses and her sub-adult male and female cubs. The guests watched as the lions began their morning by rubbing against each other, licking one another, and playing a bit together. These social behaviours are important in helping lions reinforce the bonds that are so important to their survival. 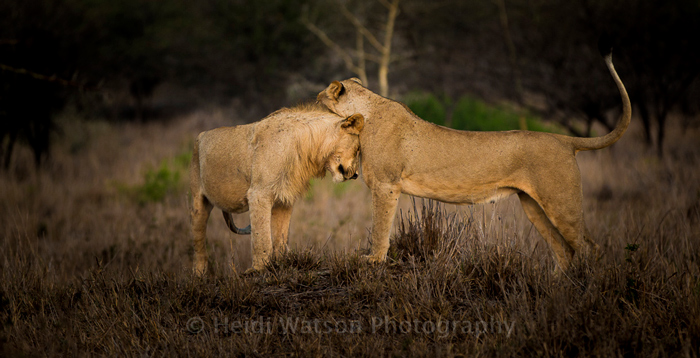 Suddenly the lioness became very focused on something in the distance. As we looked to see what had caught her attention, we noticed two mature nyala bulls browsing, completely unaware of the lion’s presence. As the lioness, with her cubs close behind, approached the nyala, they caught wind of her and fled. 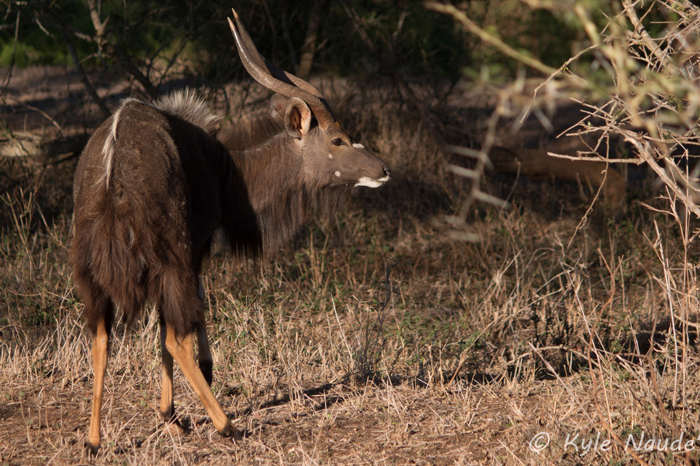 The mother, a little despondent, immediately turned her attention to a large warthog.

The old adage, ‘if at first you don’t succeed, try, try again’, certainly rings true in the lives of predators, especially when a young animal is learning the skills involved in successfully taking down prey. With the warthog in sight, the female cub took the lead and began to stalk her chosen prey.

The warthog had now turned to face the road and the moment he did so, the lion sprang into action and began the chase. The warthog tried to evade the lioness by ducking under a fallen tree, which forced the young lioness to jump over it while still in pursuit. The warthog certainly didn’t waste any time, and at full speed ran down the dirt road leaving the young lioness in his dust. 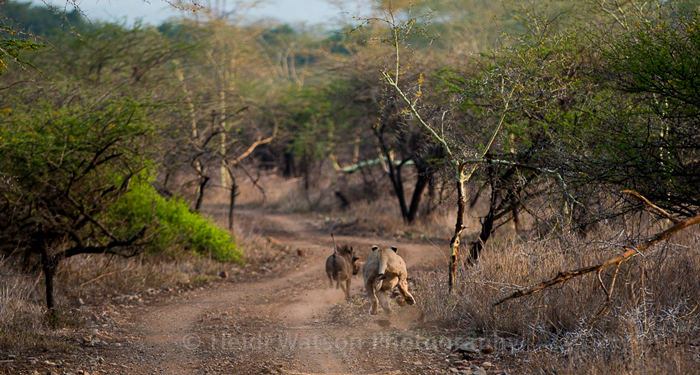 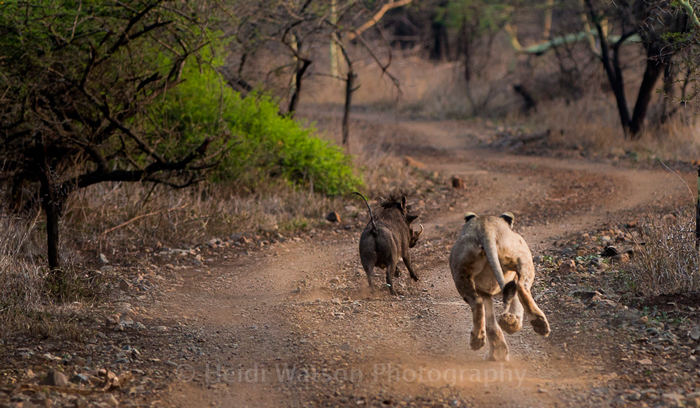 At the end of an unsuccessful chase, the young female turned around and trotted back to her family. Though she appeared quite pleased with herself, her mother and brother seemed decidedly less impressed. 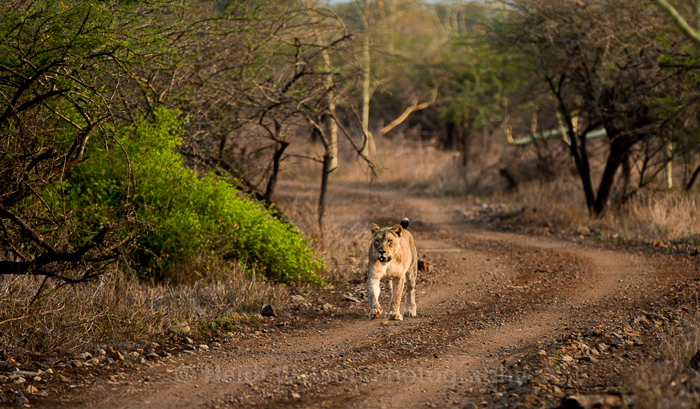 As a last-ditch effort the young female began chasing a group of nyala bulls, but with no clear strategy involved, she charged after the antelope with yet another disappointing result and for the third time had to go back empty-handed to her awaiting brother and mother. Not every sighting on a safari ends in a spectacular fashion and not every hunt by a predator ends in a kill. For the tourist, sometimes watching the story unfold is its own reward. For the predator, sometimes having a pride that supports you is the most important thing. They say practice makes perfect, and we heard that later in the day this small pride did indeed make a successful kill. 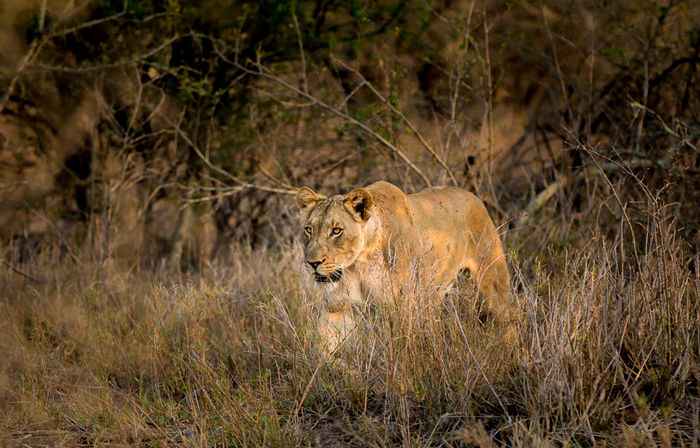